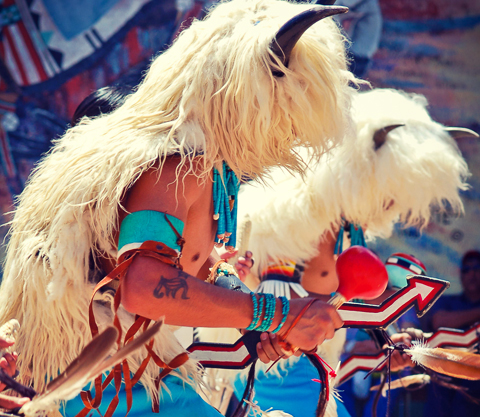 Founded by their late parents in 1983, the Cellicion Zuni Dancers entire dance group consists of 15 family members and is made up of 2nd, 3rd, 4th generation performers. Under the direction of Fernando Cellicion, the group has become one of the top professional touring native Dance companies in the performing arts. World renowned for their performances of traditional Zuni social songs & dances the group has performed throughout the U.S., Canada, Europe, the Middle East, Asia, Southeast Asia and the South Pacific. So far the dance group has been to 32 countries including 14 trips to Holland, 4 trips to Istanbul, Turkey. In 2007 the Cellicion Zuni Dancers became the 1st native Tribe to perform in the country of Mongolia. Notable performances include: The Kennedy Center for the Performing Arts in Washington, D.C. , Library of Congress where their songs were placed in the national archives and Carnegie Hall in New York City. Director Fernando Cellicion, is also an internationally renowned flutist and recording artist with 12 recordings in Bordeaux, France. The group are all fluent in the Zuni language and participate year round in their cultural community activities.