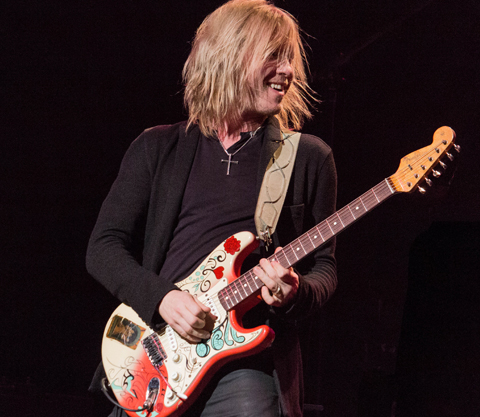 “You can kill the lights and the amplifiers/But dreams don’t care if you’re tired,” “No Rest”

There are few artists whose names are synonymous with one instrument and how it’s played in service to an entire genre.

Utter the phrase “young blues rock guitarist” within earshot of anyone with even a cursory knowledge of the modern musical vanguard and the first name they are most likely to respond with will be Kenny Wayne Shepherd. The Louisiana born axeman and songsmith has sold millions of albums while throwing singles into the Top 10, shining a light on the rich blues of the past and forging ahead with his own modern twist on a classic sound he has embodied since his teens.

In a 20+ year recording career that began when he was just 16, Shepherd has established himself as an immensely popular recording artist, a consistently in-demand live act and an influential force in a worldwide resurgence of interest in the blues.

From television performances on The Tonight Show with Jay Leno, The Late Show with David Letterman, Jimmy Kimmel Live and Late Night with Jimmy Fallon (amongst others) to features in Rolling Stone, Vanity Fair, Maxim Magazine, Blender, Spin, USA Today and more, his musical career has been nothing short of phenomenal.

At 16 years old, he signed his first record deal and burst onto the national scene with the release of his 1995 debut album Ledbetter Heights, which produced the radio hits “Deja Voodoo,” “Born with a Broken Heart” and “Shame, Shame, Shame.” His relentless touring and success on rock radio helped to drive the album to Platinum sales status. His 1998 sophomore effort Trouble Is… also went Platinum, yielding such radio hits as “Blue on Black,” “True Lies” and “Somehow, Somewhere, Someway.” 1999’s Live On spawned the radio hits “In 2 Deep”, “Shotgun Blues” and “Last Goodbye.”

2004’s The Place You’re In was a blistering rock record and was followed up by 2007’s ambitious 10 Days Out: Blues from the Backroads dvd documentary and soundtrack for which Shepherd and his band traveled throughout the American South and midwest to record with such vintage blues greats as B.B. King, Clarence “Gatemouth” Brown, Hubert Sumlin, Pinetop Perkins and David “Honeyboy” Edwards on their home turf.

2010 saw the release of Shepherd’s long-awaited first live album, Live! In Chicago, recorded at Chicago’s House of Blues during the all-star Legends tour and featuring guest appearances by such blues legends as Hubert Sumlin, Willie “Big Eyes” Smith and Bryan Lee. The live disc debuted at #1 on Billboard’s Blues chart, as did 2011’s How I Go. In 2013.

August 4, 2017 was the release date of the latest KWSB studio album, Lay It On Down. Debuting at #1 on the Billboard Blues Chart, #1 on the Rock Chart, #1 on the Internet Chart and #5 on the over-all Top 200 Current Album Chart, this album features all new material written by Kenny and several of his friends. Recorded at home in Shreveport and co-produced by Marshall Altman, Lay It On Down has spent seven weeks at the top of the Blues chart.

BLUES ROCK REVIEW – “With this being the first batch of original material from the Kenny Wayne Shepherd Band in six years, expectations were high. Consider those expectations exceeded. Lay It On Downruns the gamut of modern day blues rock with its great songs, playing, and variety. There might not be a blues rock album this year that tops Lay It On Down, it’s that good. Well worth the wait, Lay It On Downis blues rock at its finest and a strong album of the year contender.”

ALL MUSIC – “Lay It on Down feels like an intentional retort to Goin’ Home, Kenny Wayne Shepherd‘s 2014 back-to-the-blues platter. Although Shepherd never abandons the blues, either as a color or a sensibility, he expands his palette considerably on this 2017 album, opening himself up to soul, country, and hard rock… This variety, when melded with such tasteful execution, turns Lay It On Down into not only one of Shepherd‘s richest records but one of his best.”

AMERICAN SONGWRITER – There’s sufficient nitro-burning, blues-drenched shredding to keep live audiences playing their air guitars. But Shepherd’s obvious attention to and insistence on exceptional material with musical, if perhaps not always lyrical, inventiveness continues to impress, and 22 years into his career raises him and Lay It On Down above his plentiful competition.

DGM – Kenny Wayne Shepherd surrounds himself with accomplished musicians for a reason. They bring out the best in him, and here Shepherd sounds as fresh and heartfelt as he has in decades. His playing is of the same high quality that one would expect, but on this album, Shepherd exceeds all expectations, and better still, you don’t need to be a guitar geek to enjoy his incendiary playing.

Noah Hunt – Vocals A native of Cincinnati Ohio, Noah has a deep past as a musician, songwriter and vocalist. Noah’s musical journey began at the age of four when he started taking piano lessons and sang in church choir. While in college he formed a very popular Cincinnati based band Uncle Six and recorded four albums. It was in 1998 that Noah was tapped to be the lead singer for the KWSBand where his signature vocals have been an integral part of the band’s success for the past 21 years.

Chris “Whipper” Layton – Drums Originally from Corpus Christi, Texas Chris moved to Austin Texas in 1975, and three years later joined the newly formed Stevie Ray Vaughan & Double Trouble. Arguably the best shuffle drummer in the business, Rock & Roll Hall of Fame member Chris “Whipper” Layton has been a part of the KWS family since he joined Kenny in the studio to record Ledbetter Heights. Since then Chris has played on Trouble Is, Live On, the 10 Days Out: Blues from the Backroads documentary, Live In Chicago and now How I Go, Goin Home and Lay It On Down. Chris began touring with the KWSBand in 2006.

Kevin McCormick – Bass Kevin McCormick served as a producer, co-writer and bass player for Melissa Etheridge as she emerged as a world class artist with her self-titled 1988 debut, along with such acclaimed albums as Brave and Crazy (1989), Never Enough (1992) and her massively successful Yes I Am (1993). Kevin’s resume only grew from there as he started producing, writing and performing with an impressive list of artists such as Nils Lofgren, Jackson Browne, Robben Ford, John Mayall, Keb’ Mo, Crosby Stills & Nash, The Rides, featuring Stephen Stills, Kenny Wayne Shepherd, and Barry Goldberg – and now the Kenny Wayne Shepherd Band.